June 22-26 2015, at the Barn Studio, Montalvo Arts Center.
It was a great week spent in a wonderful setting, with the Thrones camp in the morning, Art Trek camp in the afternoon. I did this camp for the first time this year. I had collected some chairs through Craig’s list and FreeCycle and each camper had one at the beginning of the camp. The material for this camp is not complicated: one chair per camper, lots of wire, lots of newspapers, gallons of white liquid glue, acrylic paint. The camp was amazingly calm, it was not too hot and the campers worked very well in the time frame they had (3 hours per day). The transformation of the chairs was great to watch. I had helpers including my son Milo and it was very much needed as two of the chairs were large stools and took along time to cover with the newspapers. Also there was some power tools work involved and the campers were not using them (saw and drill). I love the collection of thrones the campers came up with!

3. Working on the structure – adding wood 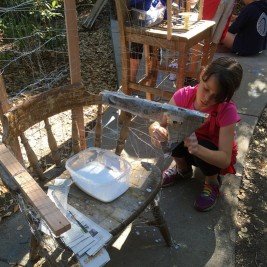