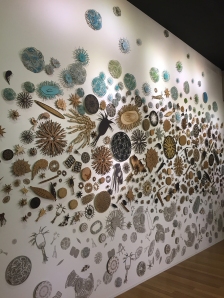 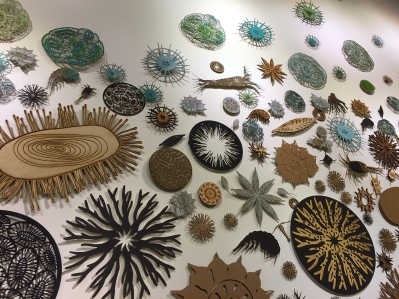 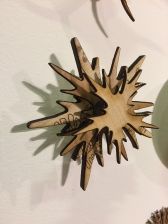 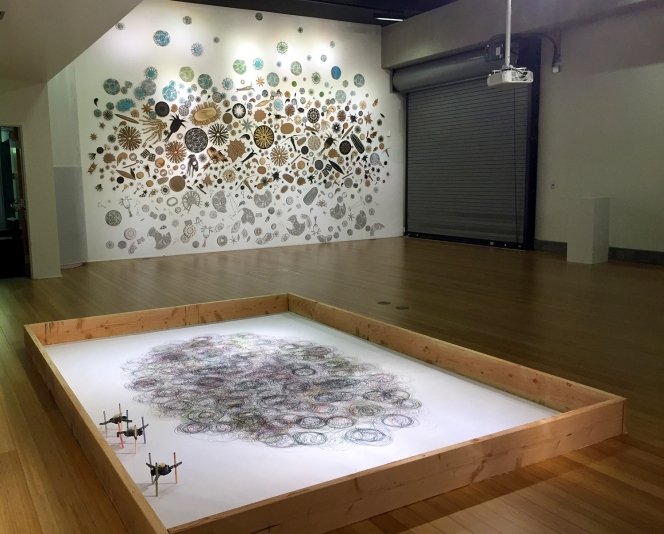 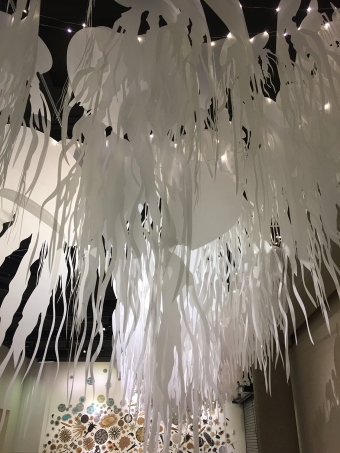 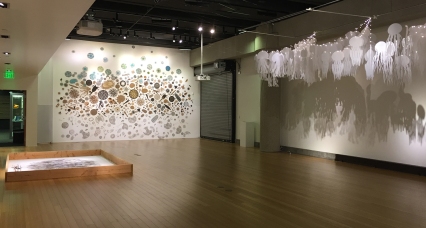 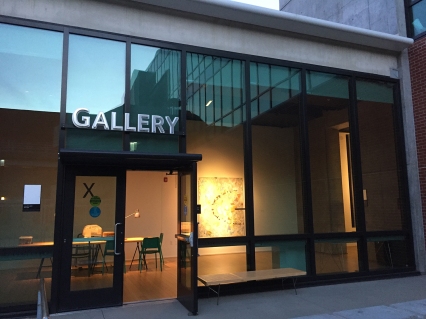 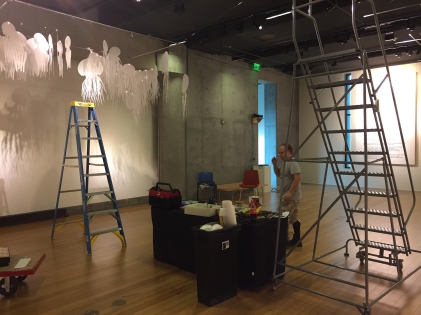 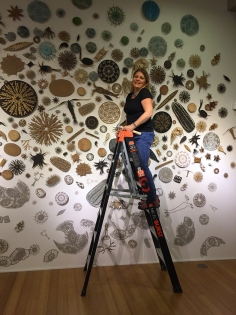 First piece of “Climate Watch” on the wall. 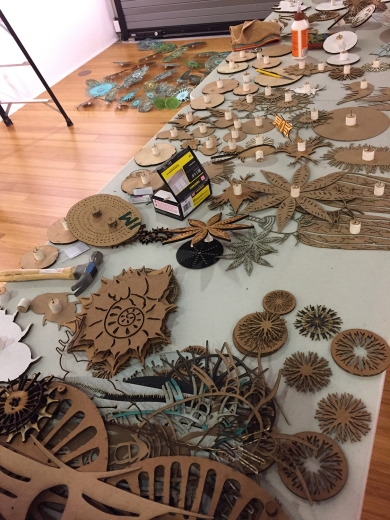 Elements for “Climate Watch” ready to be hanged 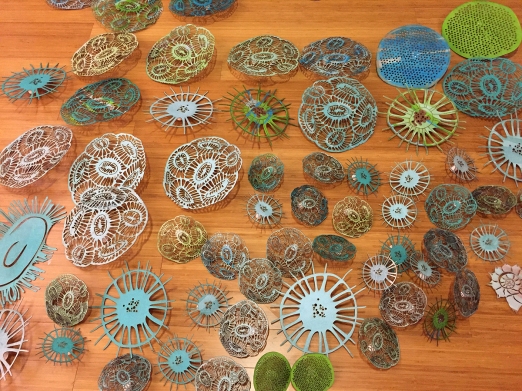 Prepping for the jellyfish schools 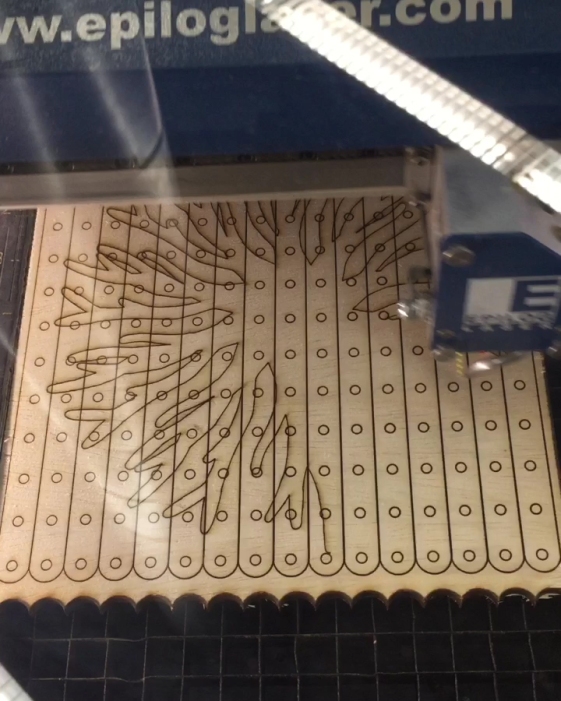 Cutting a piece of wood found in the scrap bin, already lasered by another Tech Shop member. 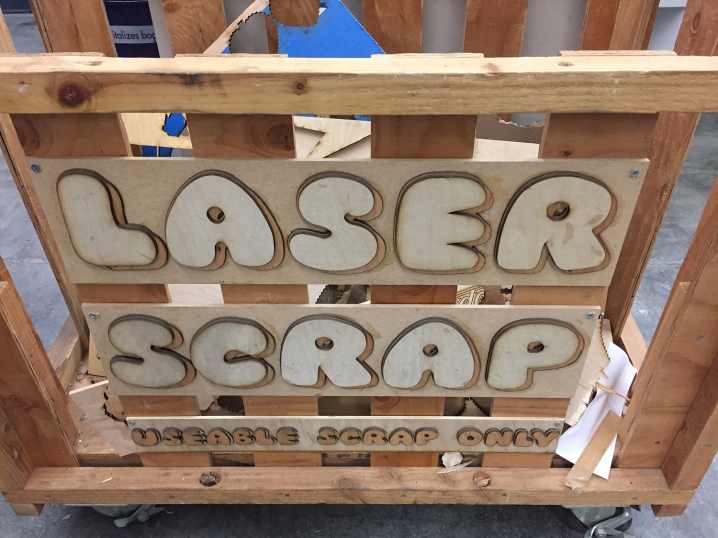 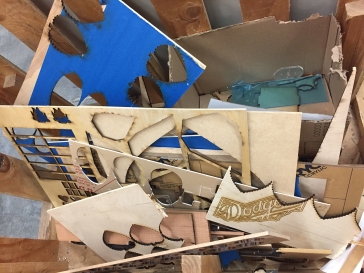 The Scrap bin at Tech Shop

Invitation for the exhibition

Plankton are the main source of food for whales and many types of fish.

Climate change is causing the ocean to become warmer and acidic. This affects the plankton, and is expected to slowly decrease their population.

Less plankton means fewer fish, and since more than one billion people live mainly on fish, they will be short of food.

When enough fish are gone, entire communities based on fishing will disappear, as the people move somewhere else to find food and work.

Global warming is filling the Mediterranean with jellyfish.

Because this affects tourism, the European Commission is working with scientists to find ways to reduce the jellyfish population.

The scientists in turn are working with gourmet chefs to develop recipes for jellyfish.

Grilled jellyfish with garlic and basil is full of protein and omega-3 fatty acids.

About Art in the Age of X

Benjamin focused on how changes in the society of his time (i.e., the 20th-century machine age) were changing the traditional meaning of art, and how a new theory of art was needed to account for those changes.

The substitution of “X” into our show title is a way of highlighting that art and the world it exists in are in the 21st century facing far greater social problems than mechanical reproduction, and that in many cases precisely how those social problems will manifest are currently unknown to us (hence the unknown quantity “X”).

As for the show itself: the individual installations in the show are each tied to well-known global issues, and these issues are conventionally treated in the media as separate (climate change, migration, food, autocracy, propaganda, robotics).

To reflect this in the show, the installations are formally quite distinct looking, and even disjoint with respect to each other. But the curatorial texts reveal (though not overtly) that the topics and thus their corresponding installations, while seeming at first glance to be quite different from each other, actually are linked intimately at the conceptual level. Hence the nature/culture chain between plankton and propaganda, by way of fisheries collapse, mass migration, government exclusion policies, and gaining political support for such controversial policies.

And that’s the central goal of this show: to not only reveal lesser-known facts about well-known topics, but to critically reveal how these apparently different topics turn out to be closely interrelated. That is critical information for citizens to know about: the problems are all interrelated, and knowing this will be the only way to truly understand current and future geopolitical events.

Autocorrect automatically changes your words, as you type them.

Imagine autocorrect in your head: running day and night, changing all your thoughts as you think them.

Autocorrect imposes its logic of what it thinks is correct and incorrect on the language you are using, just as a dictator attempts to control your thoughts and actions.

An autocracy is a country ruled not by law, but by a dictator. In an autocracy, your voice and your legal rights are suppressed. Your human logic is overruled by an authoritarian algorithm.

People migrate to escape violence, poverty, persecution, or natural disasters; to find new or better jobs; or to live with family members who have already migrated.

In 2015, 244 million people lived in a different country from where they were born.

These charts show the proportions of foreign-born to US-born immigrants for Latin American immigrant groups in the United States.

They build our phones and vacuum our house. Soon they’ll be driving trucks and practicing law. Is this good?

Economists used to think so – they said for every job a robot took, the economy would create new, better jobs for people, and everything would turn out OK.

Now they’re not so sure – a recent study showed that industrial robots are reducing both jobs and pay.

The next question is what happens when robots become artificially intelligent, and how many jobs they’ll take then.

In 1990, the Hutu Ten Commandments were published in a newspaper in Rwanda. Four years later, Rwandans killed eight hundred thousand of their fellow citizens in one hundred days, including most of the Tutsi population.

The killing was initially done by soldiers. The government then broadcast propaganda on popular radio stations, urging all Hutu citizens to kill their Tutsi neighbors and destroy or steal their property. The citizens obeyed.

Propaganda is an essential tool in autocracies such as Russia and North Korea, and more recently in the United States. It is used to convince the citizens of a country to support government actions such as war, genocide, and exclusion.